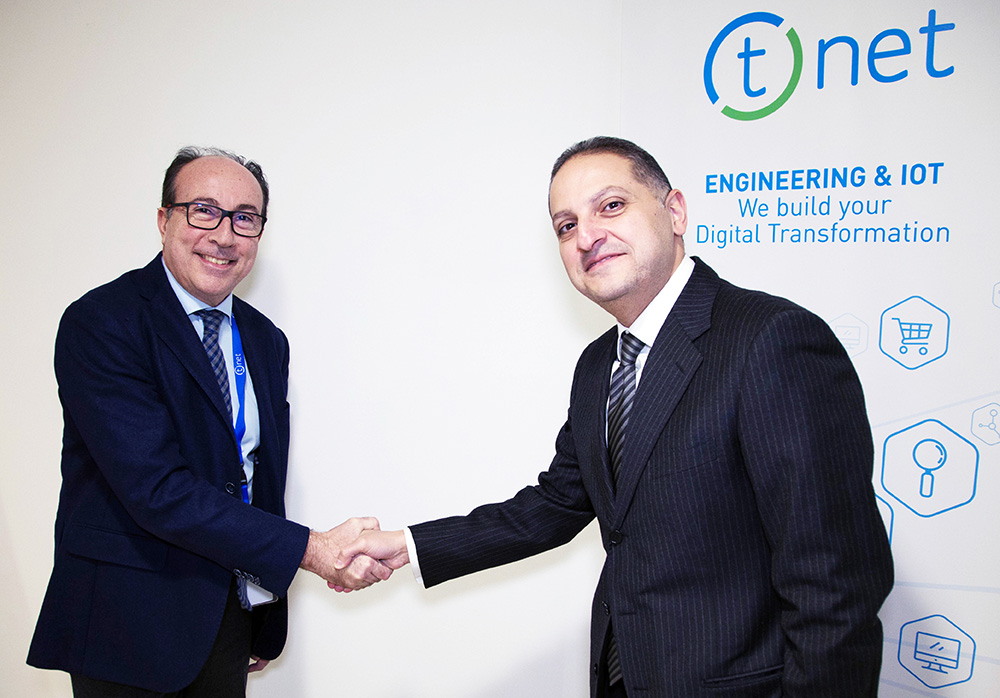 Posted at 16:40h in Business eng by Giorgio Pennisi

Ossama Bessada e Natale Lia new members of The Board of Directors. An important change to make T.net an IoT international player able to develop new technologies for ITS, Digital Cities and Smart Agriculture. Confirmed the capital increase and the Company name change.

New Shareholders and a greater presence in the international market for Digital Infrastructures. T.net – www.tnet.it – company focused on advanced solutions in Internet of Things (IoT), cloud, broadband connectivity and security GDPR compliant – confirmed the agreement with QuaeNet, multinational company working on IOT LPWAN Technology, present in Italy as QuaeNet Italia, and with Ignitus, company who helped T.net in its development process during these last months in its internationalization path.

QuaeNet CEO Mr. Ossama Bessada will be a new board member in T.net. He is known in Italy for his role as former CEO of Wind Telecommunicazioni and a managing partner of Accelero Capital. Also Mr. Natale Lia, CEO of Ignitus, will be a member of the Board of Directors in T.net. Lia was formerly General Director in Sibeg Coca-Cola and in Conad Sicilia.

Confirmed the issue of 280.000 shares of nominal Euro 1 with an average overprice of 15 Euro each to be subscribed  by Industrial, institutional and venture capitalist investors. First 127.500 of these shares have been successfully subscribed by Ignitus and Quaenet.

“The decision to invest in T.net comes from the fact that they are not a start up company any more , they have a solid team and valuable entrepreneurship in the figure of Mr. Mazzola in addition to proven implementations” says Ossama .

“They have the capability of a well rounded IOT integrator across different technologies that enables us to support them to grow more into the Italian market and take that experience in other countries where we operate like Canada and the middle East for expansion” continues Mr. Bessada.

Ignitus, with shareholdings in several companies, is partner company of Quaenet Inc. (Canada) and of Quanet Italia. Quaenet Group is working on the building of LoRa Infrastructures and IoT Applications. “In order to grow Quaenet project up, we did an intensive scouting. T.net was one of the best choices and so  we decided to go for it . The company has a great expertise as broadband connectivity provider, as system integrator and as IoT projects player. Quaenet and T.net will be for Ignitus perfect partners to complete IoT offer worldwide”, CEO of Ignitus Natale Lia said.

In November 2018, T.net Board of Director officially established the capital increase to 760.000 euros in order to allow new shareholders to join T.net. Starting from that date new managers and new investors were able to go into business with T.net and support her growth process over the next three years.

Besides, the company changes its name in “T.net S.p.A.”. The choice to remove “Italia” from the name is coherent with the process of internationalisation, started two years ago. From Singapore to Canada and to European States, T.net CEO Francesco Mazzola and his team of engineers have been disseminated worldwide company’s visions and solutions.

“We lead the company to new opportunities, always looking for best technologies; sometimes we have been beyond the borders. Today I can say that this new investors will help us to make T.net an IoT international player and they represent the natural evolution in a path that started with joining EIT Digital, last September. Synergies with QuaeNet Inc. and QuaeNet Italia will allow us to build a player able to develop innovative technologies for ITS, Digital Cities and Smart Agriculture”, CEO of T.net Francesco Mazzola said.

“We’ll open very soon Data Centers in Palermo, Frankfurt (Decix), London (London Exchange). From Palermo we will get New York trough Seabone (submarine cable arriving to Sicily Hub in Palermo and then to New York), and we’ll create a ring with Frankfurt and Milan. In Uk we’re working with Amey, one of the biggest highway concessionaire, for a project aimed to optimize the traffic in Highlands. In Italy we’re creating a weigh-in-motion smart system for Concessioni Autostratali Venete. Moreover, we won a part of the tender for Smart Road Anas on Catania-Palermo Highways, in partnership with IgGroup”, Francesco Mazzola concluded.

Mr. Pierpaolo Festino, CCO of Quaenet Inc., CEO of Quaenet Italia and Ignitus Shareholder, formerly Director of Business Unit “Business” di Wind, played a crucial role in the agreement: “Iot world evolves very fast and new opportunities are born in new markets: for these reasons we need to create dynamic and innovative partnerships. Thanks to its excellent track-record on innovation and internationalization, T.net is an ideal partner for the growth path of Quaenet in Europe and for the development of new solutions worldwide. Our main target is to start very quickly with new synergies”, CEO of Quaenet Italia Pierpaolo Festino said.

In the deal, Quaent, Ignitus and T.net were assisted by Mr. Valentino Durante for the legal aspects. The Associate Studio – Legal and Tax Consulting of KPMG assisted the Investors with a team from the partner Luca Parenti and the managers Pierluigi Laghezza and Valeria Tempesti.

T.net is the partner of your business today and tomorrow, helping you to grow and to support your processes based on actual needs and in a scalable way.

T.net is Infrastructure and IT Engineering for your innovation.

T.net notifies its customers of a maintenance activity on the CloudBag file sharing and collaboration service platform.
The activity is scheduled for Wednesday, November 16, 2022 p.m. from 4.30 p.m. and is estimated to last two hours.
We apologize for any inconvenience.

This site or third-party tools used by this site use cookies to enable certain functions of the service, to provide analytics, to store your preferences. For the full disclosure section, including all types of cookies see our Cookie policy